Chaplaincy in the Diocese of Europe

The start of the Anglican Church Twenthe dates back to 1976, when Paul Chesmond did query, during a Netherlands Deanery meeting, why there were no Anglican services in the Twente area, although there were quite a number of english-speaking expats.
When one of the Eindhoven parishioners of Dr. Sjoerd L. Bonting was posted by Philips to Almelo, he did ask to hold a meeting where this could be discussed. There was enough zest to start the first services in the Lambertuskerk in Hengelo.

Prof. Dr. Sjoerd L. Bonting founded the Twente Chaplaincy in February 1979. The first services were planned in the Sint Lambertuskerk in Hengelo, where he arranged to be able to hold two services on Sunday afternoons each month.
Although the first service was cancelled because of a terrible sleet storm, the new congregation was able to gather for a Eucharist on February 25th, 1979.
The first group consisted of about twenty people. After the service Count Alfred zu Solms offered the use of the Weldam Chapel. Because of the poor heating the first service in the Weldam Chapel was not until August 19th, 1979.
Since Dr. Bonting was also providing services in Nijmegen, Eindhoven and Arnhem, he could only come once a month for a Eucharist. A service of Morning Prayer was conducted once a month by lay reader John Tugwood. Dr. Bonting conducted regular services until he terminated his appointment at Nijmegen University to take up a consultancy at NASA in California in 1985.
Since his return to the Netherlands in 1993 he has taken services when our regular Chaplain was not available.
Dr. Bonting died 2nd March 2013 in Goor, Netherlands 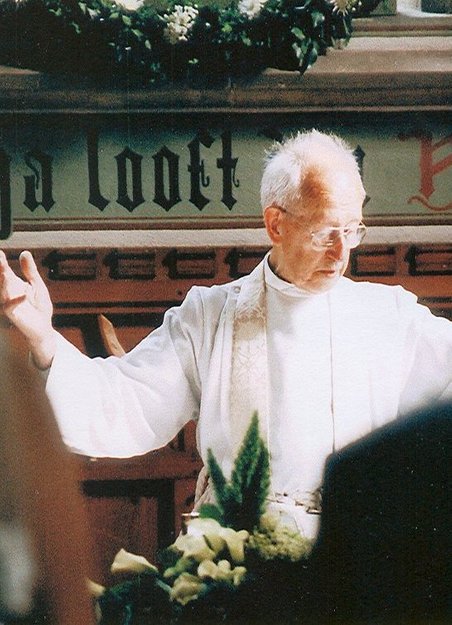 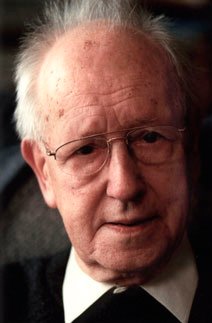 The first full time salaried chaplain for East of the Netherlands. Fred lived in a flat in Nijmegen purchased by the Nelly Zeper Stichting, set up by a loyal member of the Arnhem congregation. Fred and Doris enjoyed their time, and Fred covered the whole area, with his usual S.A.S. Forces expertise.
His sermons were enjoyed as he combined rough basic living encounters with the Gospel. The appointment for this post had been initiated by Bob Bayliff and Theo Walter, and they had approached the Intercontinental Church Society, who were Patrons for many chaplaincies in Europe. Each year they organized a week for all chaplains and wives and families, which proved to be a good time to get to know others working in Europe.
Presentations were made from each chaplaincy and it was here the work of the chaplaincy in the East of the Netherlands became more widely known. It must be stated that when Fred arrived he also had the responsibility of Eindhoven, which was obviously too much and he was able to annex Eindhoven during his ministry 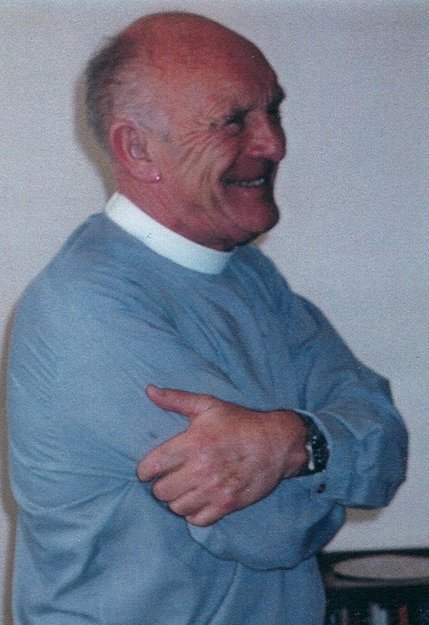 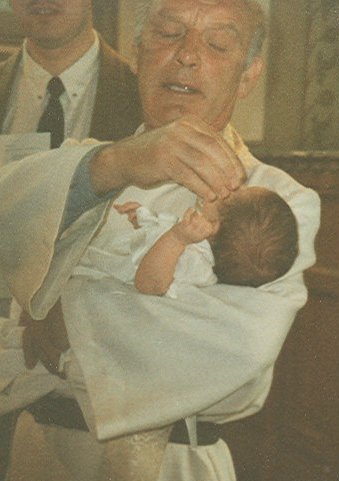 The second full time chaplain was Geoffrey Woodward with his Dutch,Yorkshire accented wife. Geoffrey was a quiet, spiritual dedicated man, and loved his work here. A move was made in the housing situation, the flat in Nijmegen sold and a house on the Ijsselsingel in Rheden purchased. This seemed to be central to Nijmegen, Arnhem and St.Mary’s, Weldam. The ministry begun in Fred’s time was consolidated, with the Old Catholic Church in Arnhem, the Student Chapel in Nijmegen and St. Mary’s, Twente.
Geoffrey was aware of the possibilities this chaplaincy held but also knew the strain and stress, of travelling to such far out places as Almelo, Hengelo, Deventer,Winterswijk, Haaksbergen, Zutphen, Apeldoorn,Lochem, Velp, Arnhem, Oosterbeek, Nijmegen, Ubbergen, Zevenaar and Wijchen, amongst others. Visiting the sick, hospitals, the elderly, holding Confirmation classes for those who lived so far apart were a real problem.
He began a postal confirmation class service which was most effective. Sadly the work told on him and he had to retire through ill health in 1993 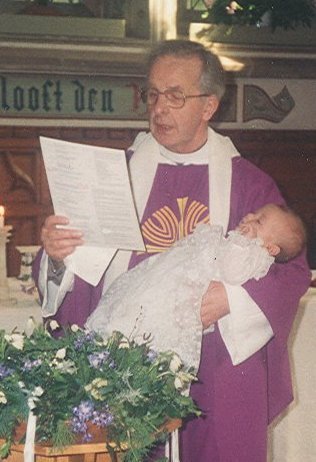 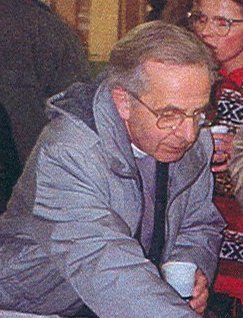 When Geoffrey Allen was appointed Chaplain he had just previously been appointed Archdeacon of North West Europe in accordance with Canon C 22, which meant he had not only the responsibility of Arnhem, Nijmegen and Twente, but as the Bishop’s oculis episcopi for NW Europe, which at the time included part of Germany,i.e Hamburg,Dusseldorf, Bonn and Cologne and Stuttgart.
With the backing of the Committee who appointed him, he was ready, he said to put the people of the Chaplaincy first, as his priority. As Dr. Sjoerd Bonting was living in Goor he had a backing, concerning services. When he arrived he inherited a fortnightly service in St. Mary’s Weldam (so that Eindhoven, Arnhem and Nijmegen could be covered), and made the services a weekly eucharist.
He served the Chaplaincy and Archdeaconry for eleven years until he retired. A very rewarding but difficult ministry, but with a farewell reception in the Hunting Lodge in Weldam, thanks to Count Alfred Solms, and a farewell reception in Middachten Castle, with thanks to Countess Ortenburg, and the Haarlem singers singing him on his way, he was grateful for the congregations who had supported him. 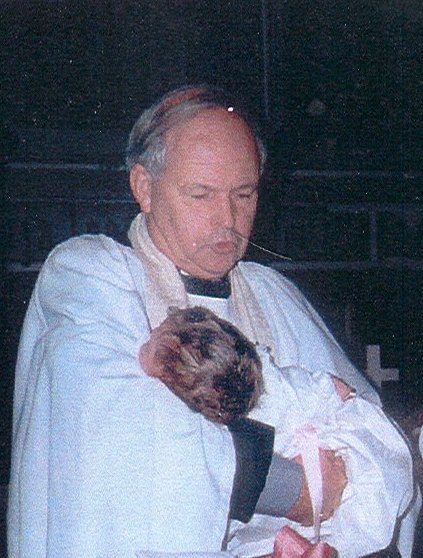 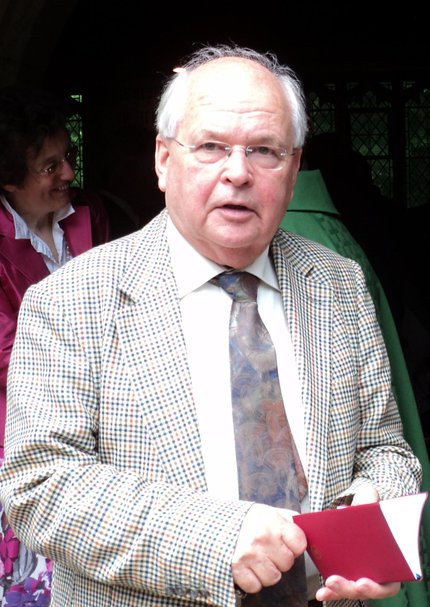 Despite the Dutch surname, Sam Van Leer was born and raised in the US. Brought up in the Episcopal Church there, Sam initially came to Europe in connection with research work in comparative politics, but while in Brussels and regularly attending Holy Trinity there, he felt a strong call to pastoral ministry in the Church of England. In Brussels, he also met Coretta, a Dutch medical student; they later married, and moved to Durham where Sam studied for ordination.

He served his curacy at St Ursula’s in Bern, Switzerland, where he and Coretta also helped with youth work and ministry in Neuchâtel. In 2005, Sam accepted appointment as Chaplain to the East Netherlands.

During his time, he built on his predecessors’ work, encouraging emphasis on outreach, spiritual growth, lay ministry, and youth work. All-Age services increased. Regular Lent and Advent short-courses, and training for prayer, reader and lay Eucharistic ministry, were offered, as well as introduction to Christianity and confirmation courses for teens and adults.

A Local Contact Scheme, based on Holy Trinity Utrecht’s, was begun. Thanks to the musical talents and leadership of church members, the East Netherlands chaplaincies formed ad hoc choirs to sing carol services, evensongs and ecumenical services, and also hosted the Archdeaconry Choral Festival.

The Van Leer family moved to Groningen in 2011, for Coretta to take up a specialist’s post at the university hospital. While continuing work as Anglican Rep to the Netherlands’ Council of Churches, Sam volunteered as a student chaplain in Groningen, and began work towards growing an Anglican Church community there 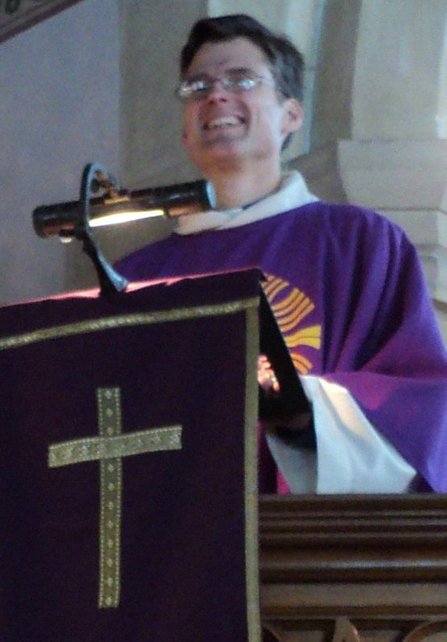 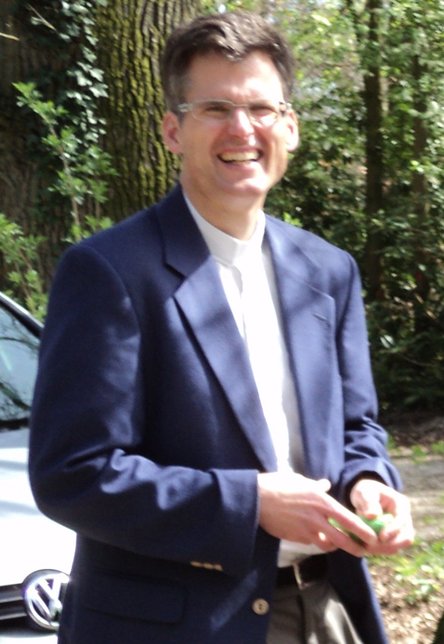 Alja Tollefsen was born in Rotterdam in 1950. From an early age, she knew that she wanted to work with people. After she finished high school, she went on to study Spanish in Utrecht − but only because she was waiting to be allocated a place to study medicine. During her first years as a student, she met Randy Tollefsen, an American who was studying in Utrecht as well. They got married and had their two children, Gunnar and Signe. After a break Alja went back to her study and gained her medical degree. She carried on as a medical researcher in a modern diabetes clinic.

Still not completely happy with what she had so far achieved, she started listening to her inner calling and, with the help of her husband, she decided to study theology. When the opportunity arose, she took the plunge and, encouraged by Randy, she and the children moved to Oxford, where she continued her studies because the Anglican Church offered her the possibility of becoming an ordained priest.

She was ordained deacon in 1998 and ordained priest a year later. She served her title in Bramhall and moved on to become vicar of a parish in Knutsford for five years. Due to the ill health of her husband, she and her family returned to the Netherlands, and Alja started working for the Old Catholic Church parishes of Schoonhoven, Gouda and Oudewater − the Anglican Church being in full communion with the Old Catholic Church.

In 2011, one year after her husband had passed away, she was asked to take a new step in her life and to serve the Chaplaincy of the East Netherlands as chaplain. Her aim is to consolidate growth and fellowship for all who come to St Mary’s in search of a Christian way of life.

She also works as a columnist for the Dutch newspaper Trouw. 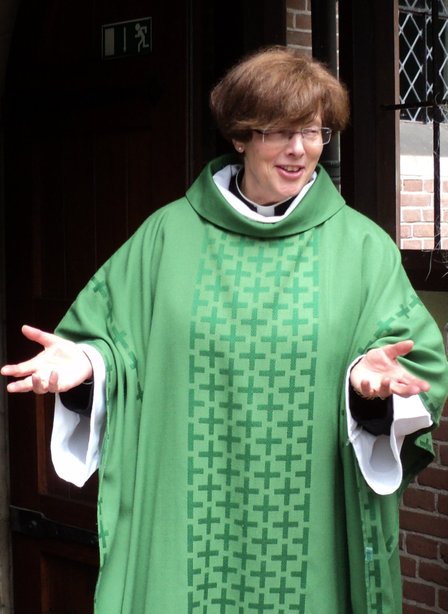 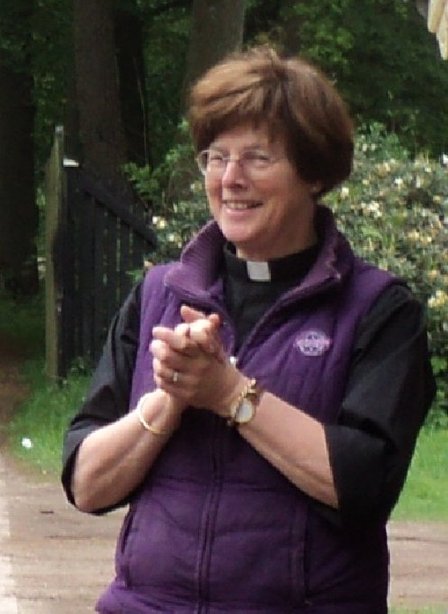 Alja Tollefsen assumed a new appointment at St. Mary's of Weldam, by then separated from the partnership with Arnhem-Nijmegen. On July 6th 2014 the Institution and Licensing service for this new term was presided by the Archdeacon for Northwest Europe the Reverend Canon Meurig Williams. Alja Tollefsen retired on December 31st 2016. 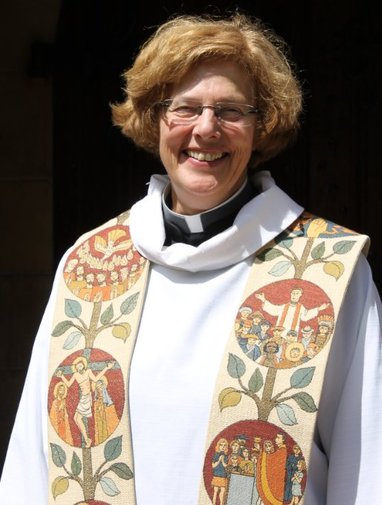 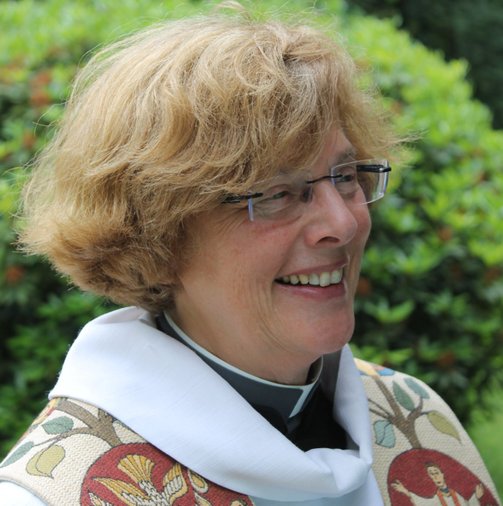 Father Brian originates from St Albans, Hertfordshire, in the United Kingdom, where he was heavily involved in his local church community from an early age. He was in the church choir and altar server as a young boy, later becoming organist (in the absence of someone more suitably proficient), churchwarden, and, then, curate at the same church.

Before he became a priest he trained and worked as a religious education teacher, later becoming school chaplain and deputy headmaster. During this period, he served as associate priest in several parishes.

Following study for the priesthood in the St Albans Ministerial training Scheme, especially for those intending to remain in secular employment, Brian was ordained in 1979 to the deaconate by The Rt. Rev. Robert Runcie, Bishop of St. Albans (later to become Archbishop of Canterbury). He was ordained priest the following year. He thrived in his experiences as a teacher-priest. (Brian was the first to begin training for the non-stipendiary ministry at under the age of thirty, which, as Archbishop Runcie was pleased to boast, changed this particular canon for the entire Church of England!)

In 1995, Brian became Vicar of St. Matthew's, Ponders End, in the Diocese of London. This was an urban priority parish with many social problems. Here, he enjoyed the challenges of growing the church membership, while working for wider community partnerships and ecumenical and interfaith dialogue and activity. He remained active in education, serving on three Statutory Standing Advisory Councils For Religious Education and as a member of The London Diocesan Board for Schools. He was a Chaplain to several Police Stations and served as a committee member for Enfield Victim Support. His incumbency in Ponders End led him, through the then Archbishop of Uganda, to an association with the Anglican Church of Uganda working for children orphaned because of AIDS and HIV.

He became the UK Director of a charity supporting Chain Foundation, Uganda, for which he was made a Canon of All Saints Archiepiscopal Cathedral in Kampala.

He moved to South Africa for twelve years and was involved in a range of charities involving his passions for animal welfare, and making music, as well as the needs of all marginalized, poor, needy and forgotten people.

He began his singing career at an early age, starting out in youth choirs while at school, growing up in St. Albans in England. He quickly moved on to performing as a tenor soloist with the St. Albans and District Youth Choir, later developing a wider semiprofessional métier as a tenor soloist. He received sing training for a number of years from the celebrated contralto, Kathleen Joyce, renowned for her international lieder performances.

While musical composition, writing poetry, and performing remain a passion for Brian, he has dedicated much of his energy to furthering the cause of care, concern and practical encouragement to those in need of recognition and support. He continues utterly committed to his priestly vocation with especial interest in pastoral care and love of the riches and beauty of liturgy. 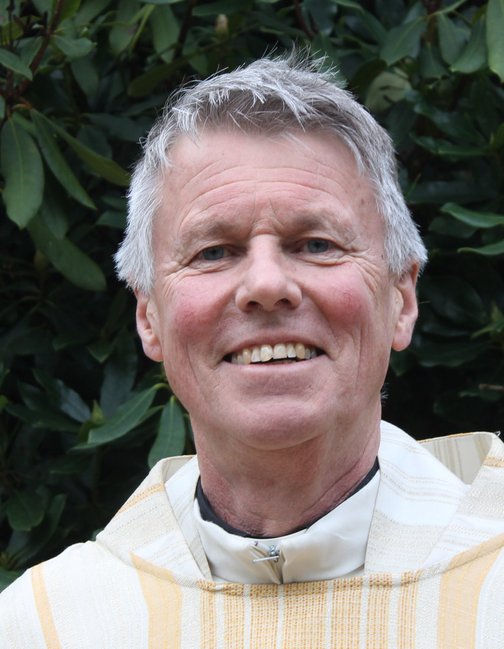